Lectures by Simon Kirby on his academic and artistic work

We are proud to present two lectures by professor Simon Kirby on Friday Dec 21: one about his work in academia, the second on his work in art including the FOUND collective.

Simon Kirby is the director of the Centre for Language Evolution at the University of Edinburgh, where he studies the origin and evolution of language. He is the father of Iterated Learning, a method that is now widely used in the Cognitive Sciences and has greatly improved our knowledge on the cultural evolution of human behaviors like language. Simon is a Fellow of the Royal Society of Edinburgh and not only famous for his scientific work, but also collaborates with artists to create award-winning interactive installations, which often further explore his scientific interests in a creative way.

These lectures are offered as part of the Media Technology AUTO Exhibition. 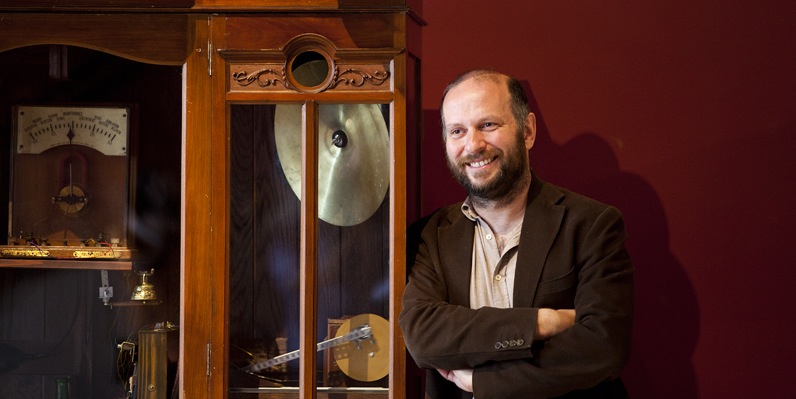 Perhaps more than anything else, language makes humans exceptional. Unlike any other species we know of, humans frequently produce completely novel sequences of signals and use them to successfully transmit similarly novel thoughts. This trait is surely very useful, leading many researchers to believe that language should be explained primarily as a biological adaptation, shaped by natural selection of genes that endow us with an innate language faculty. However, in this talk, I will argue that it is cultural, rather than biological, evolution that should be credited with giving us this uniquely productive trait. How have we come to this conclusion? I will show how to simulate cultural evolution in the experiment lab, using games in which participants imitate the behavior of previous participants. The results of these games show that there are two competing pressures acting in cultural evolution: learning, which leads to compressible behaviors; and use, which leads to expressive ones. The structures we see in human language (and other human behaviors, like music) are the inevitable product of these two forces.

In this presentation, I will talk about a series of interactive art installations that I have developed over the past decade or so with a range of collaborators, including: an emotional robotic band that’s obsessed with its own celebrity; a story telling record player whose memories are ever changing; a device that never forgets what it hears; and a collection of singing boxes for a forest at night. I’m hoping that through the presentation and discussion we can figure out together, not only how, but why a cognitive scientist working in cultural evolution ended up making these things.

The lectures have free admission but registration is required. You can do so by sending an email to Barbara Visscher: b.c.p.visscher [AT] liacs.leidenuniv.nl and indicate which of the lectures you would like to attend. It is highly recommended to attend both lectures since the second lecture builds upon the first.

Simon Kirby’s lectures happen in parallel to our Semester Project exhibition with the title AUTO in Old School. Old School is around the corner of the Gravensteen building and also the location for the drinks, before, in between and after the lectures.